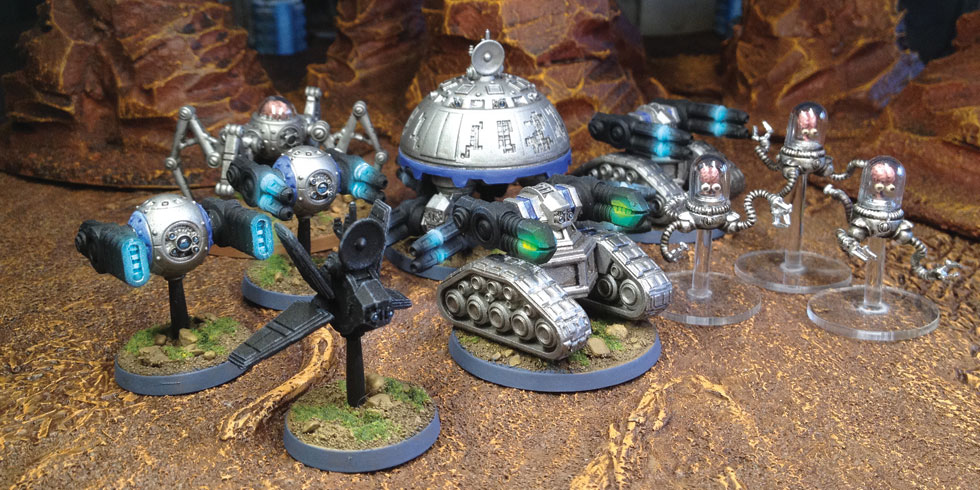 Originating from Gallinia Prime, the home planet of their now extinct makers, the Mekkus make their methodical way across the galaxy to imperil the home planets of every living being. Comprised of modular mechanical constructs directed by an artificial intelligence, the Mekkus appear to be devoid of emotion, carrying out their attacks with ruthless efficiency. Reliant on the technologies of their makers, Mekkus use weaponry commonly found throughout the known galaxy and are dependent on ultonium for power. By their nature, Mekkus are immune to the mind controlling psi powers wielded by channelers of The Deep, however, some have grafted organic material to themselves giving them a connection to the psychic flux.

The Mekkus faction in the Counterblast Adventure Battle Game is almost exclusively mechanical in nature. Its modular construction facilitates easy weapon and mode of transportation upgrades for its various troops. While many Mekkus are slow compared to their organic counterparts, they are usually more heavily armored and difficult to destroy. This faction also includes fast attack troops and a troop capable of repairing other friendly units, making any Mekkus crew a challenging and defendable force.